Humans have been drawn to flowing water from the very earliest times, and the chalk streams and springs of the Chiltern Hills are no exception. The focus of human activity and modification for millennia, one could say that the chalk streams are archaeological features in their own right. For them to have a future, we must also better understand past, and the legacy of thousands of years of people and chalk streams interacting. 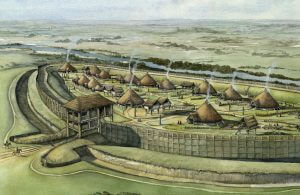 The first post-glacial (c.10-11k years ago) human occupation of the Chilterns would have been by hunter-gatherer bands who were attracted by the reliable sources of aquifer-fed water as well as the abundant game which would have gathered. Flint extracted from the chalk was also a desirable resource for the crafting of tools and weapons. For several thousand years the valleys would have been well travelled and home to seasonal camps. By 5000 years ago, farming was well established, with different requirements placed on the land and the chalk streams. In this Neolithic period, many earth and timber monuments were constructed, often with reference to springs (Walaud’s Bank, Luton at the source of the Lea, for example). By the Late Bronze Age and into the Iron Age (between 3200-2200 years ago) some of these locations became the sites of hillforts, large earthwork enclosures which served many functions, but seem to be deliberately positioned in this landscape with regard to chalk streams and springs.

As populations grew, and technological advances such as the adoption of metalworking allowed for increased efficiency in land exploitation, permanent settlements began to emerge in the Chilterns, and these were clustered around the chalk streams. The major towns we see today are built upon the foundations of earlier activity, inextricably linked with the presence of the waterways.  Chalk streams not only been desirable locations for settlement for their supply of drinking water and food resources, but also for their motive power. Industries of all types have thrived over the millennia along the banks of the rivers. Iron smelting in the later prehistoric and Roman periods at places like Cow Roast on the Bulbourne, and part of the Ver down stream of St Albans (Roman Verulamium) were navigable by barge at least in Roman times. Between that period through to modern times there have been abundant mills (more than 90!) which both written records and archaeological remains attest to, processing a range of materials from turning grain into flour, rags into paper, and even a brief flirtation with milling silk! Another major stream-reliant industry was the watercress ‘farming’ which led to a range of watercress beds through the network of chalk streams. Sadly, these are nearly all out of operation.

Beyond the pragmatic, waterside locations have been used for spiritual and religious activity since prehistoric times. From the Bronze Age burnt mounds on the Chess, to Roman shrines and temples on the Ver and Hamble Brook, and the subsequent relationships between Saxon and Medieval churches at ‘holy wells’ and near the rivers, we can see people are drawn to ritual behaviour near water – even today, we ourselves follow suit. Many different faiths are still placing items of personal and religious significance in chalk streams.